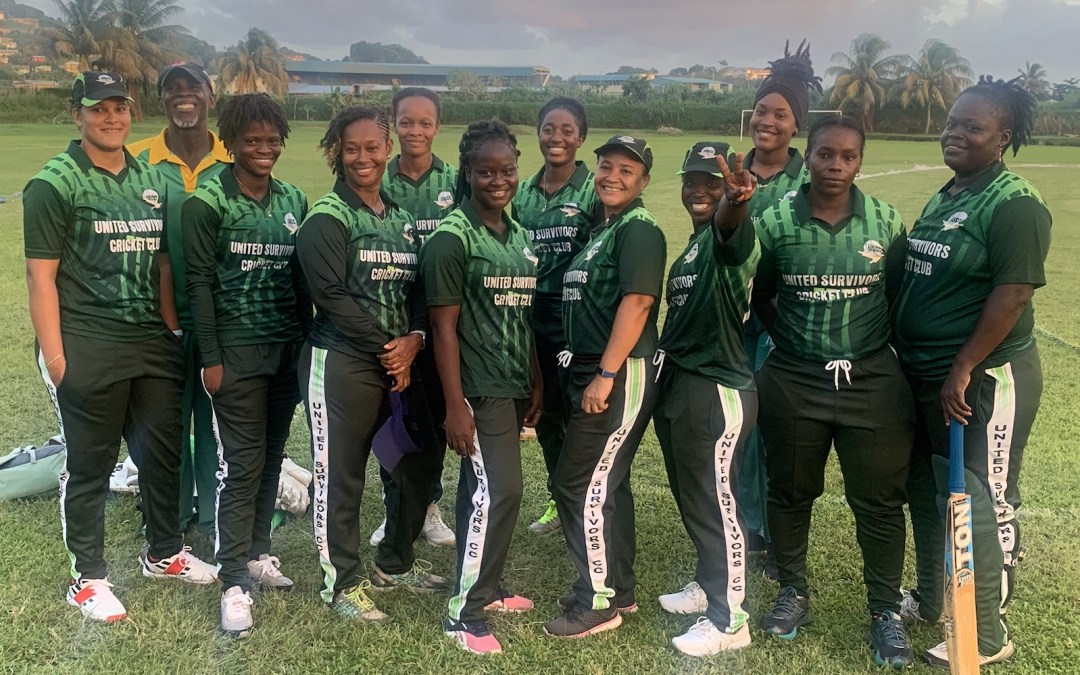 Arnos Vale, St. Vincent – A culture of winning has been the hallmark of the longevity and success of United Survivors, so says Samantha Lynch, and 2020 was no exception as they walked away with the SVGCA Women’s T20 championship, beating J.G Tigress and Sons by six wickets on Saturday at the Sion Hill Playing Field. Inserted to bat J.G Tigress and Sons were restricted to 87 for 7 in their allotment of 20 overs. Samantha Lynch 3 for 13 and Jannillea Glasgow 3 for 16 stifled the J.G Tigress batting. In reply, the new double female champions United Survivors reached 88 for 4 off 18.2 overs and were guided home by the experienced Cordel Jack, who played a solid innings of 46 not out.

The tournament started with thirteen contenders and now there are four teams left with the hope of copping the T20 championship honors this year. This is after the quarter finals were completed on Sunday 4th October. Police Two downed the defending champions Flow Rivals by 64 runs at Park Hill, confirming that there will be a new champion. Police Two amassed 188 for 8 in their 20 overs and were led by Dillon Douglas 68 and Rickford Walker 44. Olanzo Jackson took 3 for 36 and Kensley Joseph 2 for 45 for the defending champions who fell short in their reply; 124 for 8 when their overs ran out. Deighton Butler 34 not out was the Flow Rivals mainstay. West Indies T20 pacer, Kesrick Williams 5 for 15 and Nigel Small 2 for 35 picked up wickets for Police Two.

At Sion Hill, Flow Radcliffe secured their semifinal berth with a seven wickets win over Police One.  Police One managed 90 all out in 17.2 overs. Selrick Caine top scored with 32. Spinners Rasheed Frederick; 2 wickets from 2 deliveries,  Asif Hooper 2 for 12 and Othneil Lewis 2 for 22 shared the wickets for Flow Radcliffe. In reply, the 2019 runners up used up 13.5 overs and lost 3 wickets as they reached 101. Shamon Hooper 41 and Romano Pierre 28 saw their team to victory.

Then also at the Sion Hill playing field, Victors One completed the final four puzzle with a 5 wickets win over Vee Jays Roof Top and Bar North Windward. North Windward got up to 129 for 9 from their 20 overs with Kerwin Williams 46 and Braxie Browne 27 not out. West Indies U15 fast bowler, Solomon Bascombe 3 for 20, Kimson Dalzell 3 for 21 and his twin Kenson Dalzell 3 for 28 shared the wickets to fall. Victors One then replied with 132 for 5 with an over to spare due to a smashing 16 balls 46 from former Windward Islands batsman, Donwell Hector, while another former Windward Islands player, Atticus Browne added 35. Meshack Williams was impressive with the ball for North Windward taking 3 for 13 from 4 overs.