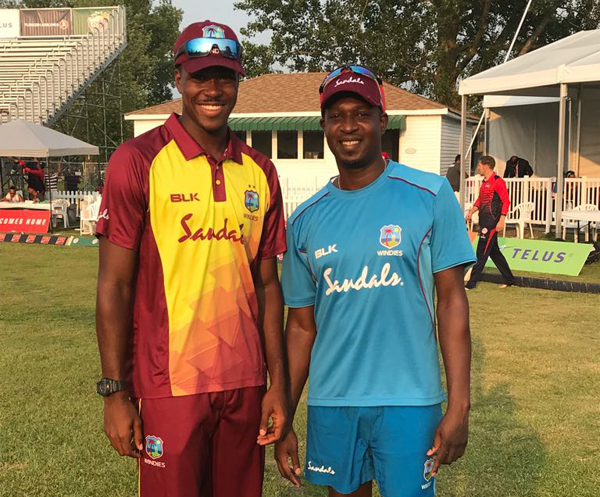 Arnos Vale, St. Vincent – Two Vincentians have been called up to ply their trades for the Windies B team. Left-handed fast bowler Obed McCoy and Physiotherapist Denis Byam have been enjoying the start of their careers with the Cricket West Indies team after two emphatic wins to their campaign in the Global T20 Canada competition.

The tournament is in the inaugural phase and features some of the world top T20 cricketers with the likes of Chris Gayle, Andre Russell, Steve Smith, David Warner, Lasith Malinga, Sunil Narine, and more. Firstly dubbed as a development team, the Windies B team has taken the tournament by storm with Vincentian Obed McCoy charting the way with some skillful bowling performances. His seven (7) wickets so far have excited the commentators enough to identify him as the best bowler on show in the tournament.

The tall 21-year old who considers himself shy grew up in Buccament Bay and plays his local cricket for Team Rivals. McCoy bowling has developed over years under the mentorship of former West Indies left-arm seamer and fellow Vincentian Deighton Butler. With his recent showing, following representation in the regional Super 50 and regional 4-day tournament, as well as his performances for St. Vincent and the Grenadines in the Windward Islands competition, an elevation to the senior team is expected to be around the corner.

His Excellency Denis Byam, a national sports ambassador received the call to serve at this level following his astute professionalism over the years turning out for the Windward Islands. Byam is the only first-class cricketer in the region who is a trained physiotherapist.

Byam who hails from Troumaca, the North Leeward village still plays active cricket for Victors Cricket Club. He was appointed a sporting ambassador two (2) years ago following accomplishments in sports including being the first head coach of a Cuban national cricket team. Additionally, as a young sports enthusiast, Byam has served many athletes through his clinic, Byam Physical Therapy and at the Milton Cato Memorial Hospital, where he works fulltime.

McCoy and Byam will be on show again on July 5, 2018. The tournament is broadcasted live on Sportsmaxx, with the final scheduled for July 15, 2018.