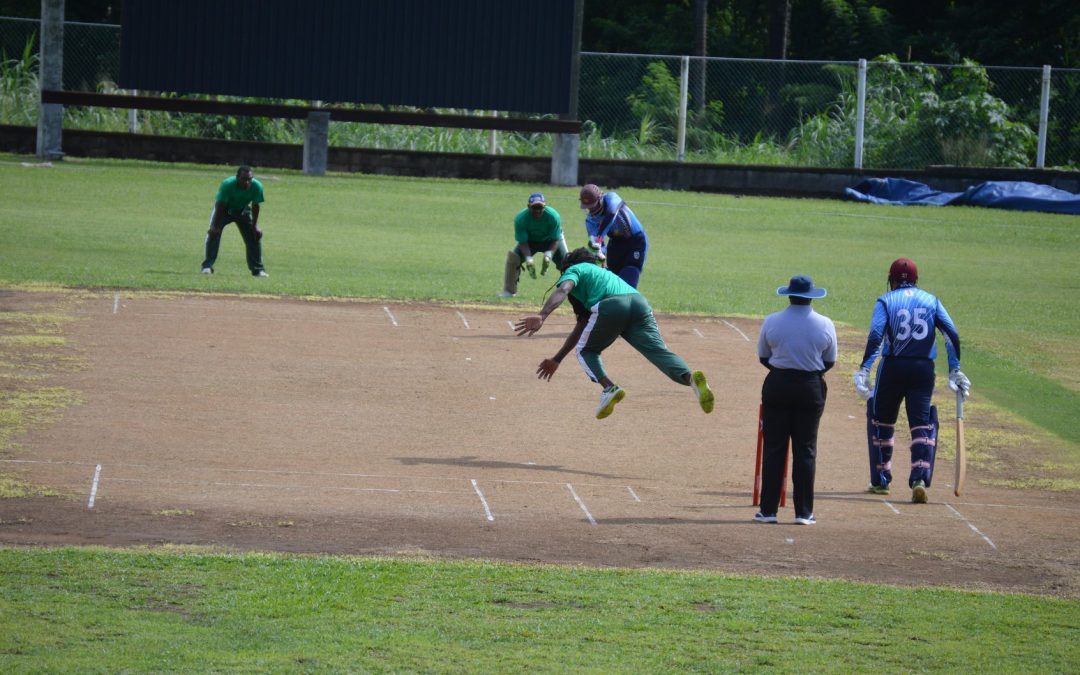 CJ MSDA Jules Anthony Northern Stars barked loudly in their own backyard on Saturday when they hammered Victors Two by 122 runs at Cumberland. Mcleon Williams 59 and Jade Matthews 57 not out orchestrated the Northern Stars sizable total of 179 for 2 in 20 overs. Victors Two’s progress was immediately halted, and from 14 for 5 they stumbled up to 57 all out in 13 overs. Ronique Laborde 3 for 8 and Winston Samuel 3 for 11 wrecked the Victors Two batting effort.

The Vee Jay’s Roof Top and Bar sponsored unit however went under to Flow Rivals by 8 wickets in a rain affected match on Sunday. Vee Jay’s Roof Top & Bar North Windward totaled 153 all out in 19.5 overs. Kirton Lavia got 55 and Veno DaSouza 52. Lindon James took 4 for 21 for Flow Rivals, who set a reduced target of 117 in 15 overs, reached 119 for 2 in 13 overs. Kensley Joseph 36 and Deighton Butler 32 led the batting for the defending champions.

In a match up dominated by the ball, Flow Radcliffe overcame Police Two by 3 wickets at Park Hill. Police Two were dismissed for 86 in 16.2 overs. Othneil Lewis 3 for 27, Richie Richards 2 for 13, and Rasheed Fredericks 2 for 19 made life difficult for the Police Two batsmen.

In reply, Flow Radcliffe lost seven wickets In reaching 87 from 14.4 overs. Shamon Hooper held Flow Radcliffe together with an unbeaten 30. Kevin Abraham 3 for 16 and Dillon Douglas 2 for 22 pulled out all stops but could not prevent the Flow Radcliffe team from crossing the line.

Police Two however rebounded on Sunday to overcome Pollard Investment North Windward by six wickets. Pollard Investment North Windward got up to 131 for 8 in their 20 overs. Darius Martin shone with the ball taking 3 for 35 for Police Two, who replied with 132 for 4 in 14.2 overs, behind a 32 ball 68 from Salvan Browne. There were two wickets apiece for Meshack Edwards and Kerwin Williams.

Victors One stopped Police One by four wickets when they met at Arnos Vale One on Saturday. Police One scored 114 for 8 in their 20 overs, led by Gosnel Cupid 32. Luke Wilson 3 for 16 and Solomon Bascombe 3 for 32 impressed with the ball for Victors One who depended heavily on Mile Bascombe’s 44 to guide them to 115 for 6 in 16.5 overs. Reuford Jack 2 for 19 and Kimali Williams 2 for 27 threatened to derail the Victors One Reply.

The weekend ended with a six wickets win for Police Two over Strike Eagles. Strike Eagles made 123 for 7 in their reduced 18 overs. Elmore Alexander and Reuford Jack took 2 for 19 and 2 for 22 respectively for Police One who got to their target, 127, for the loss of 4 wickets in 15 overs. Parnel Browne was unbeaten on 51.