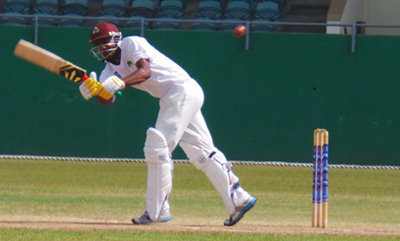 Arnos Vale, St. Vincent – The 8th and 9th round of the West Indies Championship are being hosted at the Arnos Vale Sporting Complex.

Firstly, the 8th round is being played from Thursday, February 21 – Sunday, February 24, 2019. The match will be contested by Barbados Pride and home team Windwards Volcanoes.

Windies middle order batsman, Sunil Ambris, fresh off a 102 not out against Leeward Islands Hurricane will be leading the Windwards Volcanoes following the injury of regular captain, Kirk Edwards. Ambris, who many cricket followers around the region believe is quite unfortunate to be omitted from the senior regional side has shown consistency since his return to the Windwards team in the first class season. So far, he has amassed 235 runs from 3 matches at an average of 58.75, with 1 century and a half century.

Also featuring this weekend is veteran Devon Smith, who is the most successful regional batsman. The stylish left-hander has accumulated 621 runs at an average of 56.45, with 2 centuries and a fifty. Against the Bajans three weeks ago, he reached his top score of the season, a classy 199, which ensured a Windwards’ victory in the first matchup with Jonathan Carter’s led side.

The Barbados team is boosted by the return of tests players. Shamarh Brooks added as the captain to replace Carter as skipper, despite an extraordinary captain’s knock of 149 not out in his last outing to secure victory over Trinidad and Tobago Red Force. Jomel Warrican, the left arm spinner from SVG has also brought strength to the Bajan’s bowling line up.

Other key features in this match for the Windwards Volcanoes will be the young sensation, Kimani Melius, Windies speedsters Sherman Lewis and Obed McCoy. Vincentian Ray Jordan will also be in the lineup, along with inform batsmen Alick Athanaze and Kavem Hodge.

Cricket commences at 10 am daily and finishes at 5 pm. There is no admission fee. Fans are encouraged to come and enjoy the highest standard of regional cricket.

Windwards Volcanoes (75 points) currently sits at 3rd position on the table, with Barbados Pride on trailing them at 4th with 73.6 points with a game in hand.