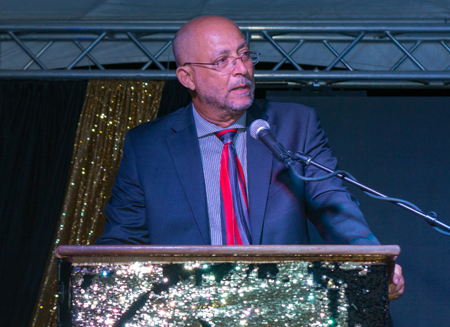 I want to begin by thanking President Dr Kishore Shallow for his invitation and for the kind hospitality I have been receiving since my arrival yesterday. Over the past couple of years I have developed a very high regard for Kishore’s strong  commitment and passion for improving both local and regional cricket. From what I have seen, he clearly has the ability and competence to lead at the highest levels of Windwards and West Indies Cricket. Young, bright, visionary cricket lovers like Dr Shallow are urgently needed in West Indies cricket administration.

I recall that I first came to St Vincent as a youth to play Soccer. That was a very long time ago in 1974 when I kept goal for St Kitts in the Cable & Wireless regional U18 Soccer tournament. We came up against St Vincent right here at Arnos Vale on a very hot Sunday afternoon. St Kitts was leading 2 nil at half time when the coach substituted me because of a pre-existing groin injury which I had aggravated. The coach said he was saving me for the next match. Unfortunately there was to be no next match. We lost 4-2 and that was the end of St. Kitts in what was a knockout tournament. The old adage of ‘don’t count your chickens before they hatch’ certainly applied then. Sometimes even the most subtle intervention, especially if it is timed badly, can upset the confidence or equilibrium of the team dynamics. Too many of our cricket selectors, coaches and administrators are still struggling to learn that lesson.

Next year, 2019, will therefore mark 45 years since the Windwards and Leewards have been competing as separate entities in all forms of regional cricket. Perhaps we can use next year’s anniversary as good reason for OECS cricket stakeholders to come together to reflect on the experiences and learnings of Windwards and Leewards cricket over the past 45 years. Perhaps we should use the occasion to identify the threats and opportunities that lie ahead for  the growth and development of cricket in the OECS as both a sport and business. I shouldn’t need to remind you that many Millions of dollars have been invested in building and maintaining cricket stadiums across our sub-region, including here at Arnos Vale. This Arnos Vale stadium today is completely different to what it was when I played football here 44 years ago. And local cricket boards and their partners struggle every year to meet the high costs of travel and accommodation expenses for teams to participate in the several inter-island cricket tournaments annually. Has all this money been well spent? Is St Vincent and Windward Islands cricket producing better results today than they did 45 years ago? How much more investment is needed to get our cricket-related results to the promised land? Mr. President, perhaps your association might consider developing this idea of “a gathering”. Maybe you might even consider inviting your Government and the OECS Secretariat to partner with you to jointly host such a conference.

Over the years I connected with several Vincentian cricketers, some of whom I worked with when I was West Indies team manager. For example, I had the privilege to manage Dawnley Joseph as a member of the WI U19 team in a successful home series against England where Dawnley was one of the leading batsmen. I also met Ian Allen when I was with the Leewards team. Although I had previously interacted with Mike Findlay when we were both journalists with Radio Antilles, I got to know him quite well later on when he was WICB chairman of selectors. As team Manager I enjoyed working closely with Mike and he was missed very badly when his term expired as a selector in 2002.  But the two Vincentian international cricketers who I spent most time with were Cameron Cuffy and Nixon McClean, both of whom were regular West Indies squad members during my tenure as Manager.

I have been back here to St Vincent for various business or leisure reasons since I ended my tenure as West Indies team manager 14 years ago, but this is the first time that I have landed at your impressive new international airport. Allow me to take this opportunity to congratulate the Honourable Prime Minister, and all who worked so long and so hard to raise the funding to design and build out this phenomenal Argyle Airport project. From what I could see, it clearly was well worth the long wait and the high cost.

Just like the tremendous hurdles we now face in our cricket, the vision to literally move mountains and create a new Argyle airport must have seemed hopeless at the beginning. But, even if you may not yet be seeing all the signs, my experience tells me that the launch of your new airport has opened a new chapter in the economic and social history of your country.  In this regard the Argyle International Airport has created a potent stimulus that has the potential to bring together public and private sector concerns to seriously explore some big ideas as a tourism destination. The airlift and hotel development interests that I expect that your Government is already pursuing, would be prerequisites for ushering in a new era of tourism entertainment events here. The equation basically sounds like this: New International Airport, plus Increased Airlift, plus an increased number of hotel rooms, plus big event ideas, plus investment dollars, equals an exciting future for the Government and people of St Vincent and the Grenadines. My point is, that investing so heavily in the Argyle airport was just the start of an exciting tourism entertainment wave which will have to be fueled by additional public and private sector investment until it can become self-sustaining.

It is therefore up to President Kishore and his team to ensure that the next investment wave will include some impactful cricket-related entertainment. But you would need to get in early on the conversations which I expect must already be taking place at the highest levels of Government and potential investors. Well-structured and well-funded Public/private partnerships can achieve good returns for your country. But it won’t happen by accident. You and your Government must make it happen – together.

One of the more obvious cricket entertainment opportunities that you might want to explore is to start a T20 CPL franchise. Obviously, there are costs and benefits that would have to be examined closely before making such a move. But the good news is that the economic impact research from past CPL tournaments suggest that the return on investment for a host country can be quite good.

For such cricket events, there are three main categories of benefits that are usually measured in economic impact assessment terms:

Allow me to list some of the 2017 CPL impact data for St. Kitts & Nevis, the smallest country that currently hosts a CPL franchise:

–  Over the event period, there were 908 Pan-Caribbean visitors, and 232 international visitors who arrived specifically for the event.

– The total expenditure by visitors was US $3.1 Million.

– The largest percentage of viewers originated from India and Pakistan. But many were Asians living in America, Canada or London, three key markets for St Kitts tourism.

– In 2017 CPL tourists spent more than US $20 Million as a result of travelling to and within the region for the wider 6 week CPL tournament.

My main message to you tonight therefore is that there are emerging opportunities for St Vincent to claim a bigger market share in the global industry of cricket tourism. And we must be prepared to do whatever it takes so that we are not left behind. Although our West Indies teams are not winning and pleasing local stakeholders as much as we would all like, our exciting style of cricket is still very much in demand by global audiences. That is why our best individual talent is still able to benefit from the growing cricket industry. There is no question that our domestic and regional cricket performance standards need significant work. Winning regularly would not only make West Indian fans happy, but it would also create greater commercial value in the global broadcast rights market.  Lifting our cricket performance upwards is itself a subject for another speech on another day.

Finally, whilst there has been no study on the overall annual impact of West all Indies cricket in the region, we know that the wider socio-economic impact of  cricket is significant throughout the region in that:

We also know that, of the US $40M that Cricket West Indies (CWI) itself spends around the region annually,  $11M goes directly into the pockets of more than 105 players. $16 Million is spent on tours and tournaments, and $5M is spent on salaries for admin and professional staff.

During the 2015 England test tour to the region the estimated spend per match day  amounted to US $5.6 Million . The actual spend in the three host nations were: US $22M in Antigua, $21.9M in Grenada and $19.5M in Barbados. That was an Average of $21.1M dollars spent in each host nation. You can therefore assume that it is not by accident that the Sandals hotel chain has recently re-entered into the international cricket sponsorship market.

In short, the impact of regional cricket is significant for national economies and local businesses alike. In order to optimize and grow these economic benefits, local cricket Boards, Cricket West Indies (CWI), Caribbean Governments, and all stakeholders need to work as partners if we are to optimize both commercial and talent development results.

In closing, let me again say what a pleasure and honour it has been for me to be your guest tonight. And let me again congratulate President Kishore and his team for putting on such an outstanding awards gala and dinner event. Every aspect of it has been impressive. And it seems that your Association has been doing good things for local and regional cricket. But I implore you not to stay in your comfort zone with a ‘business as usual’ attitude. There is clearly plenty of work still to be done if we are to realise the full potential that cricket has for growth here and in our region, both as a sport and as a business. Now is therefore the perfect time for you to bring your cricket stakeholders together to explore some big tourism-entertainment ideas and to stimulate an upsurge in cricket interest and results. Ladies and gentlemen, now is the time for St Vincent and the Grenadines to step up to the next level in your quest to be leaders in Windwards and West Indies cricket. Thank you.