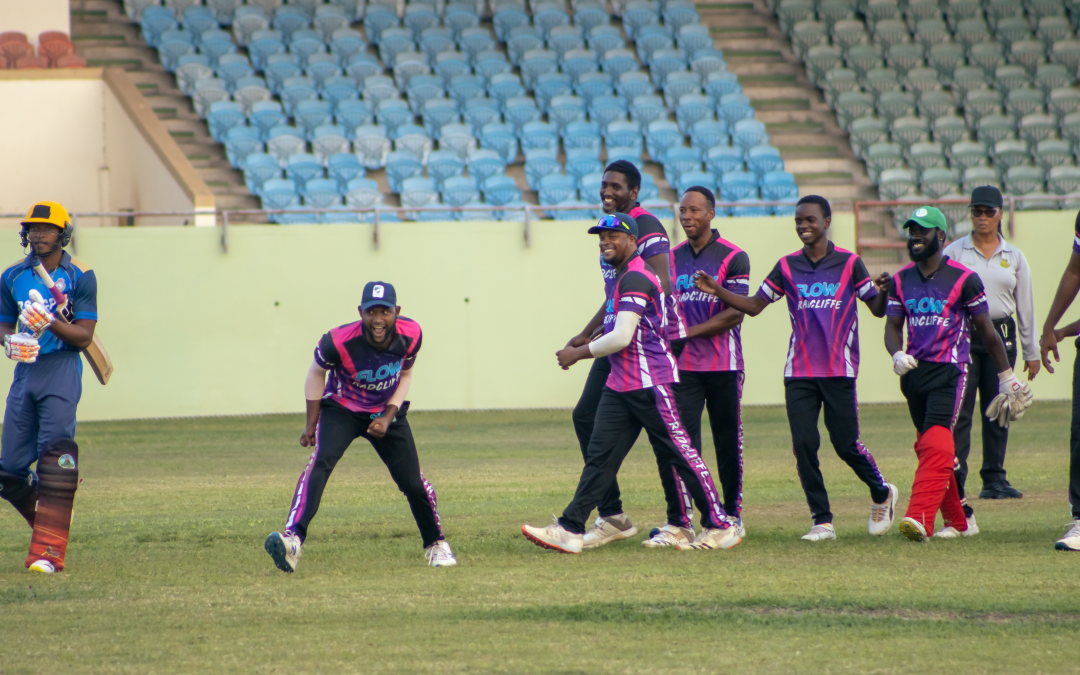 Arnos Vale – Over the weekend, 9 matches of exciting cricket took place in the Neil Williams T20 Competition.  After the last ball was bowled on Sunday, Flow Radcliffe remained the only team unbeaten in Group B while Saints and Flow Rivals remained undefeated in Group A. Anson Latchman also scored what is the 4th century of this year’s tournament. 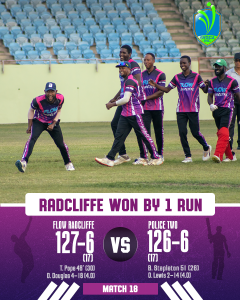 The first heavyweight clash of the weekend was ultimately decided by just 1 one run.

Radcliffe batted first and was at one point 30 for the loss of 5 wickets. An early spell of 4-18 by Dillon Douglas made quick work of the top order. However, a fighting partnership of 77 by Tijourn Pope and Delorn Johnson ensured that Radcliffe had some runs on the board to work with. Tijourn finished the innings not out on 48.

In their chase, Police Two also got off to quite a shaky start but a corrective innings from Beniton Stapleton (51 of of 26 balls) took the Police unit to 125 from 16.5 overs. Stapleton fell on the second to last ball of the innings leaving 3 runs required from 1 ball. Police Two could only scamper a single off the last delivery which ensured that Radcliffe remained unbeaten after what was a thrilling encounter. 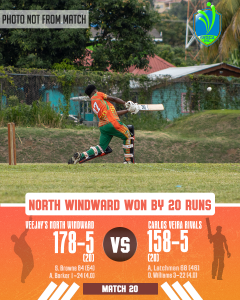 In the second match of the weekend, Veejay’s Rooftop and Bar North Windward secured their first points of the tournament thanks to efforts by Shem Browne and Deswayne Williams

Being sent into bat, North Windward made full use of the opportunity to set the pace of the game and posted a total of 178 for the loss of 5 wickets after their 20 overs. Shem Browne played a wonderful innings; falling just 16 runs short of a century.

Rivals were unable to keep up with the required run rate when it was their turn to bat. Anson Latchman (64 off 46 balls) was the standout batsman for the Rivals but a spell of bowling by Deswayne Williams (3-22) ensured that the other batsmen were restricted in their scoring efforts. 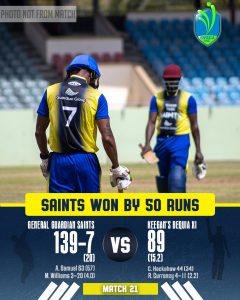 Saints remained unbeaten at the top of Group A after taking on Keegan’s Bequia XI on Sunday at Arnos Vale.

Saints won the toss and decided to have a bat. Alex Samuel and Romel Currency were instrumental in the Saints reaching a defendable total after the majority of their top-order batsmen were dismissed for less than 10. Meshack Williams finished as the best bowler for the Bequia unit with 3 wickets from 20 runs.

Saints then took to the field to defend their total of 139. A confident innings of 44 from 34 balls by Cosmus Hackshaw was the only real threat to the Saints but a lack of support from any other batsman meant that this threat was quickly extinguished. Romel Currency finished with the best figures of the match of 4 for 11. 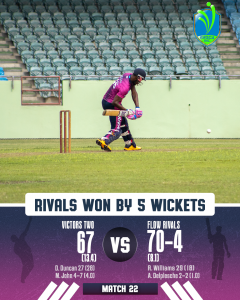 Victors Two were handed their first loss of the competition when they played Flow Rivals on Sunday morning at the Arnos Vale Sporting Complex.

Victors Two felt that batting first was the better choice and decided to do so upon winning the toss. This decision did not work in their favor, however, as they were quickly bowled out for 67 in just 13.4 overs. Dave Duncan finished the innings as the top scorer (27 from 28 balls) while Mahlon John did the bulk of the wicket-taking (4 wickets for 7 runs).

Flow Rivals wasted no time in reaching the target required for victory. Renrick Williams (29 from 18 balls) and Cody Horne (26 from 20 balls) got the Rivals across the line in just over 8 overs. Ajay Delplesche finished with figures of 2-2 from his lone over. 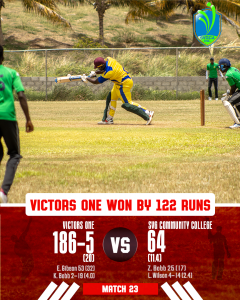 Victors made it 2 wins in a row as they continued their run of good results.

Victors won the toss and opted to bat on a wicket that appeared suitable for anything. Ethan Gibson continued his excellent run of form by scoring his second half-century in just as many games. Victors also benefited from scores by Atticus Browne and Reshawn Lewis. Kyle Bobb’s economical 2-19 from 4 overs was the standout in the bowling department.

Being set a target of 187, SVGCC certainly had a challenging chase set out for them. Early spells by the Victors pacers removed the first 4 batsmen for just 5 runs. Zevron Bobb showed some resistance (scoring 25 from 17 balls) but Luke Wilson finished the task for the Victors with figures of 4-14. 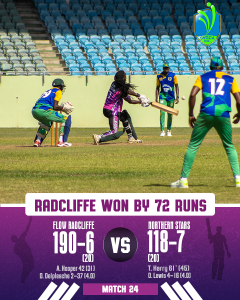 What was the most anticipated match of the weekend bowled off at 2 pm on Sunday. However, after the dust settled at the Arnos Vale Sporting Complex, it was Radcliffe that would remain the only undefeated team in Group B.

The coin fell in Radcliffe’s favor and they chose the have first-knock. Restricting the star-studded Radcliffe lineup proved a task too big for the Stars as an all-around dominant performance set the Radcliffe total at 190 after their 20 overs. Asif Hooper top-scored with 42 from 31 balls while Richie Richards and Kadir Nedd chipped in with 30 odd each. Donald Delplesche finished with the Stars’ best bowling figures, 2 for 37 from his 4 overs.

North Leeward’s stay at the crease was not as fruitful as their opponents. A well-played innings by Tilron Harry 61 (45) was not enough to even near the target set by Radcliffe. Othniel Lewis displayed his experience and control as his spell of 4 wickets for 16 runs kept the Stars’ batsmen at bay. 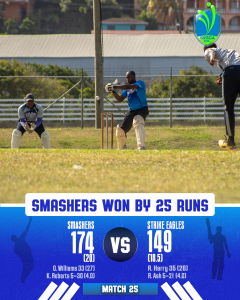 It’s not often that there are two 5-wicket hauls in one game of T20 cricket, yet that was the case when Smashers and Strike Eagles faced off on Sunday.

Smashers got off to a speedy start that never really slowed when they took to the crease. Ozico Williams top-scored with 33 from 27. Although Keyroy Roberts’ picked up five wickets, this did little to slow the Smashers’ run rate as they finished on 174 after 20 overs.

Strike Eagles’ innings lost the first wicket of their chase with the score still on 0 and the wickets never stopped falling after that. Rohan Ash dealt the damage with the ball as he picked up 5 wickets for just 21 runs. An attempt at some late heroics by the last pair of batsmen did little to sway the result in Strike Eagles’ favor as they remained winless after the conclusion of the match. 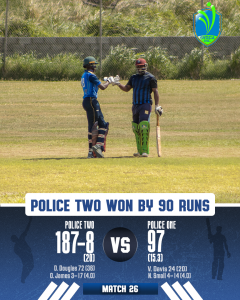 Who would’ve thought that when Police and Police came head to head at Sion Hill that Police would emerge victorious?

Police Two won the toss and chose to make use of the opportunity to regain some confidence in their batting after their loss the day before. It was the usual suspects of Dillon Douglas and Salvan Browne who stole the show with the bat. Police One’s bowlers could do little to arrest the flow of runs from the 134-run opening partnership. Police Two ended their innings on 187-8 after losing some late wickets. Osrick James was the best bowler for the Police One with figures of 3-17.

When Police One took to the field, Nigel Small’s 4 wickets for 14 runs restrained any attempt by the batsmen to get going. Vertil Davis top-scored with 24 from 20 balls as the lone batsman to pass 20 before his team was bowled out for 97 runs. 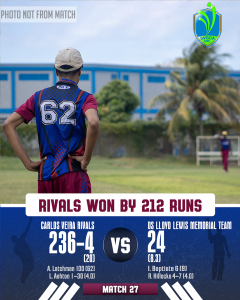 In the final match of the weekend, Carlos Veira Rivals absolutely demolished the Dominic Sutherland Lloyd Lewis Memorial Cricket Team with both bat and ball.

The Rivals unit, led by a century off the bat of Anson Latchman, powered to a total of 236 from their twenty overs. The bowlers could do little to prevent the leakage of runs.

Rivals then put down the bat and took up the ball to wrap up the encounter in just 8 overs. No batsman from the Dominic Sutherland Lloyd Lewis team was allowed to enter double figures. Reynolly Hillocks finished with a career-best 4-7 from his allotted overs.