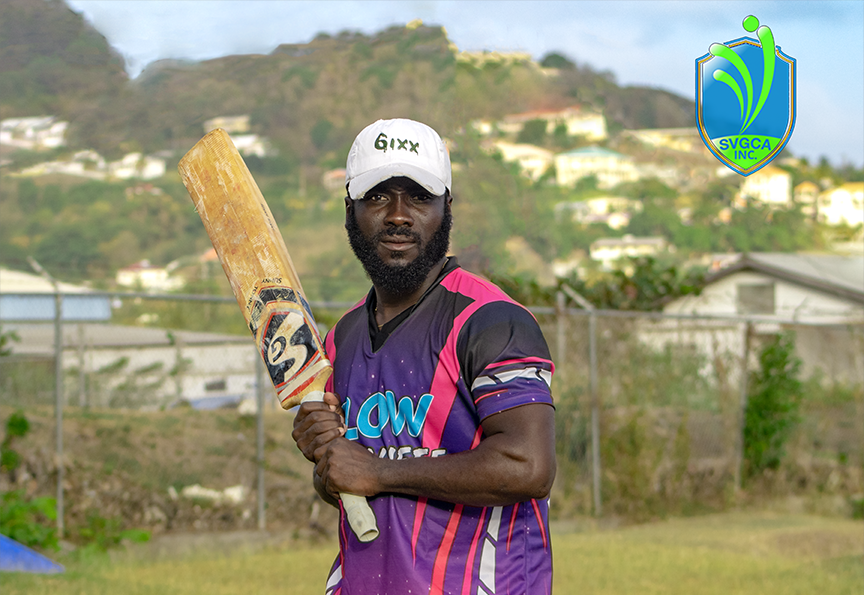 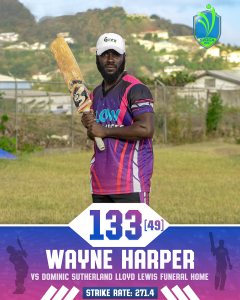 Harper scored 133 off of just 49 deliveries

At Sion Hill, a display of absolute domination with the bat ensured that Flow Radcliffe emerged victorious in their first match of the tournament. Powered by a dazzling batting masterclass from Wayne Harper, Radcliffe pummelled the Dominic Sutherland Lloyd Lewis Funeral Home by a massive 182 runs.

Electing to bat first, Radcliffe was adamant that the scorers remained hard at work as the boundaries seemed to be flowing continuously. Romano Pierre opened the innings and accumulated a 29-ball 64 before being dismissed by Roger Francois. While Pierre’s innings was a great display of batting, it was an explosive innings of 133 from 49 balls (12 4’s and 10 6’s) by Wayne Harper that undoubtedly stole the show. It was one many would pay to witness as he boosted the score to an unbelievable 246 runs before being dismissed. Flow Radcliffe eventually ended their 15-over innings at 251-3.

Being set an almost impossible target of 252 to win, the Dominic Sutherland Lloyd Lewis Funeral Home could only hobble their way to 70 in 14.0 overs. Asif Hooper with 2 wickets for 4 runs and Rasheed Fredrick with 2 for 10 runs subdued any effort to get the score going. Israel Baptiste top-scored with 18 off 24 balls.

Cumberland played host to the much-anticipated matchup between the Carlos James Jules Anthony MSDA Northern Stars and Police One. However, what appeared to be a tight match on paper ultimately concluded with a comfortable victory for the Stars due to an unbreakable opening partnership.

The Stars won the toss and elected to set the pace with the ball. This decision was seemingly correct since both openers for the Police One unit were dismissed in the first over without scoring. Although the dream start by the Stars was countered by Antonio Sutherland (62 off 48 balls) and Parnel Browne (27 off 19 balls), the Police team would only amass 150 runs before being bowled out in the 20th over; Aleon Caesar shone brightest with the ball finishing with 4-20 in his 4 overs.

Chasing a victory target of 151, the Stars reached home in just 13.4 overs, courtesy of an indestructible opening partnership by Leshawn Lewis (92* off 51 balls) and Elron Lewis (35* off 31 balls). 150 runs always appeared achievable, especially on a wicket that seemed suitable for run-scoring, but even so, the resilience displayed by the Stars’ opening pair ensured that the wicket column remained untouched during their chase.
Results: Carlos James Jules Anthony MSDA Northern Stars won by 10 wickets

At Stubbs, Salvan Browne ensured that he announced himself in this year’s tournament with a century when he came up against Carlos Veira Rivals.

Batting first, Police Two put 220 runs on the board thanks to the combined efforts of Dillon Douglas (81 runs off 48 balls) and Salvan Browne (123 runs off 64 balls). Olanzo Jackson was the main wicket-taker with 3 wickets for 30 runs when the Police unit ended their innings on 220-5.

Chasing the 221 for victory, the Rivals only managed to get 83 before losing their tenth wicket.  An all-around good bowling effort by Police was vital in ensuring that the target quickly became impossible for the Rivals. Shammon Hooper was the pick of the bowlers with 3 wickets for 12 runs while Olanzo Jackson top-scored with 18 runs for the Rivals.