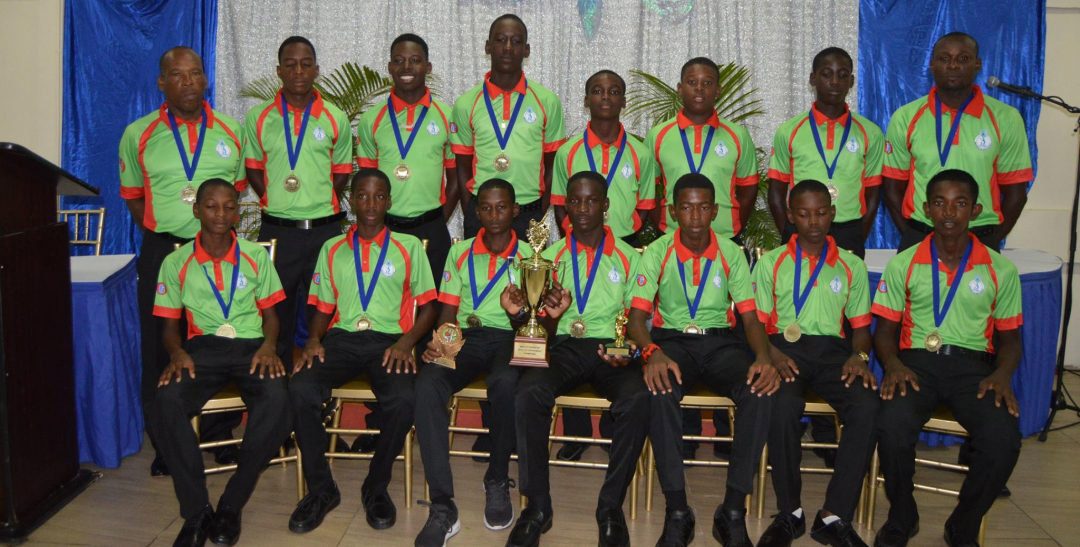 Grenada, Champions of the Winlott Inc Windward Islands U15 2017 Tournament held in SVG.

Arnos Vale, St. Vincent – After a tense and competitive week of cricket, it was the Grenadians who lifted the championship trophy for the Winlott Inc. Super 6 Windward Islands Under 15 cricket tournament.

Grenada who won 4 of their 6 matches, played consistent cricket throughout the tournament with contributions coming from the entire team. This was evident with only 2 selectees in the Windwards Under 15 team, the least of the 4 teams. However, the total teamwork led them to the top of the points standings with 26.2 points, ahead of runners-up and defending champion Saint Lucia, who also won 4 matches but as a result of acquiring fewer bonus points, ended on 25.9 points.

St. Vincent and the Grenadines (SVG) put out their best performance in almost 10 years, finishing with 3 wins and 20.1 points, resulting in their 3rd place position. Dominica derailed SVG’s course to the championship in their final match of the tournament to claim their only victory and ended on 7.3 points.

There were many stand out performers in the tournament, Ackeem Auguste led the way with two brilliant centuries, including a highest score of 139 not out. Also, Vincentians Luke Wilson and Coby Dabreo tied for the most wickets of 16 with their off-spin and fast bowling respectively.

President of the SVG Cricket Association Inc., Dr. Kishore Shallow expressed satisfaction with the tournament. “I commend the Grenadian team on their triumph in what was a keenly competed tournament. The boys represented themselves in a manner that they should be extremely proud of. Most pleasing to me was the tremendous support of parents, locally and who traveled with the teams, this could only mean well for the continued development of these players and by extension, Windward Islands cricket,” elaborated President Shallow.

Summarized tournament results are as follows: